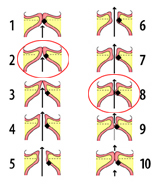 Mucosal Wave:
Wave-like motion of the vibrating layer of the vocal fold as seen upon slow motion-like viewing through stroboscopy

In Brief
Vocal fold scarring is abnormal scar tissue in the vibrating layer of the vocal fold. Vocal fold scarring causes a number of voice disorders that are problematic to patients and is very challenging to diagnose and treat.

Stroboscopy Key to Detecting the Altered Mucosal Wave Typical of Vocal Fold Scar
Diagnosing vocal fold scar is difficult. Examination by stroboscopy (which involves a synchronized strobe light and offers a magnified view of the larynx) is necessary to detect the altered mucosal wave typically seen in vocal fold scar.

Current Perspective
Although there is still no definitive intervention for vocal fold scarring, substantive improvement and (more importantly) prevention of continued scarring can be attained though multidisciplinary voice care and intervention. However, a complete return to normal function – especially for singing – cannot be expected.

Advisory Note
Patient education material presented here does not substitute for medical consultation or examination, nor is this material intended to provide advice on the medical treatment appropriate to any specific circumstances.

All use of this site indicates acceptance of our Terms of Service.