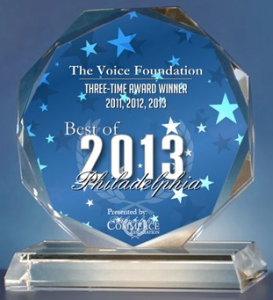 The Voice Foundation was founded in 1969 by the internationally celebrated voice specialist Wilbur James Gould, M.D.. At that time interdisciplinary care of the human voice was non-existent. Dr. Gould’s groundbreaking foresight brought together physicians, scientists, speech-language pathologists, performers, and teachers to share their knowledge and expertise in the care of the professional voice user. Since 1989, The Voice Foundation has been led by Robert Thayer Sataloff, M.D., D.M.A., F.A.C.S., an internationally renowned otolaryngologist who is also a professional singer and conductor, and author of more than 1000 publications, including 48 textbooks.

One doesn’t need to be an actor, singer, or broadcaster to be a professional voice user.  Teachers, physicians, salespeople, and most everyone depend on their voices to earn a living.  Warning signs of a potentially serious disease – a raspy voice, a persistent, dull pain in the throat, difficulty swallowing, or a tired voice – are ignored too often.

According to the National Institute on Deafness and Other Communication Disorders of the National Institutes of Health, approximately 7.5 million Americans have trouble using their voices. Despite widespread voice problems, too little is known about the vocal disorders that cut short careers, impair the speech process, devastate and even threaten people’s lives.