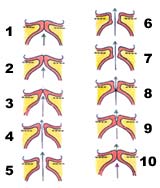 Voice “As We Know It”

Speaking and singing involve a voice mechanism that is composed of three subsystems. Each subsystem is composed of different parts of the body and has specific roles in voice production.

Key Components of the Voice Box

Abnormalities or Changes in the Vibratory System Result in Voice Disorders

Breakdowns can occur in any one or all three subsystems of voice production. This patient education series focuses on voice disorders, specifically breakdowns in the vibratory system.

Understanding How Voice Is Produced

Back to the Top